The Board of the Inland Waterway Association visit Bedford

On the 12th March Bedford was honoured to host, for the first time, the board of the Inland Waterway Association. IWA is a national organisation which works to protect and restore Britain’s network of canals and navigable rivers for the enjoyment of everyone.

The meeting was held at Box End Water Park with IWA board members and region chairs from throughout the UK attending. Bedford & Milton Keynes Waterway Trust joined the IWA team for lunch and presented an overview of the proposed 26Km Waterway Park which will link the river Great Ouse in Bedford to the Grand Union Canal in Milton Keynes.

The group was also joined by John Hodgson and his wife Enid – John is secretary of IWA’s Great Ouse Branch and was a one of the founder members of the B&MK Waterway Trust back in 1996. He brought with him a lot of history about the proposed Waterway Park.

After lunch the IWA Board and the Trust were joined by the MP for Bedford, Mohammed Yasin, and took the opportunity to enjoy some early spring sunshine on the John Bunyan community boat to see Bedford’s Embankment from the river and understand the challenges river poses.

After disembarking, the group went on to visit the new landing stage where they we were joined by Cllr James Valentine from Kempston. He and Tom Tagg from the Trust talked the IWA team through the construction of a new landing stage at Kempston Mill, including the difficulties of undertaking such a project at the start of the winter in pouring rain and a lot of mud! IWA has designated Kempston Mill as a “Silver Propeller” designation for IWA members.

During the visit Paul Rodgers, the chair of IWA, emphasised that IWA is extremely keen to work with the Trust and do all they can to support the Waterway Park project.

“IWA brings a great deal of experience in regenerating waterways, working with volunteers and pulling in a wide range of funding for projects. We certainly hope to see a lot more of them as we take steps to secure largescale investment in the B&MK Waterway Park”

“The Board were keen to see for themselves the progress being made on this strategically important proposal for a new waterway. The time is right for this project with its benefits to bio-diversity; water management and to the economy of the area. Particularly impressive are the immediate benefits of demonstrating an electric trip boat and the new landing stage. IWA is committed to supporting the BMK Waterway Trust and its local partners as they seek to deliver this landmark initiative which brings a new dimension to the regeneration of the waterways in the 21st century.”

“The John Bunyan, a community boat run entirely by volunteers, is a wonderful resource that offers a unique view of Bedford from the beautiful River Ouse”

All in all, everyone agreed it was a thoroughly worthwhile day!

The B & MK Waterway Trust was established in 1995 to promote the development of a broad waterway park which will link the Grand Union Canal in Milton Keynes to the river Great Ouse in Bedford through a series of waterway parks. More detail can be found at: http://www.bmkwaterway.org.

Having designed a route, now protected by local authority policies in three Local Plans, the Trust is currently lobbying for its inclusion as part of the Oxford-Cambridge Arc infrastructure. The Trust works with a range of partners to ensure opportunities to integrate the Waterway into development and thereby maximize delivery of local benefits. The Trust is a company limited by guarantee and a registered charity.

Running trip boats is a key activity for the Trust, raising funds and awareness. Its cruises let thousands of local people enjoy being on their local waterway in Bedford, and now in Milton Keynes, demonstrating the value that Waterway Parks can bring. 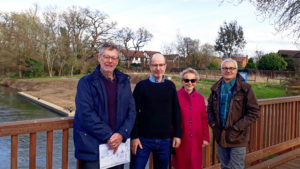 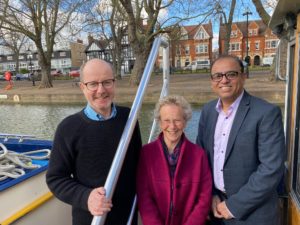