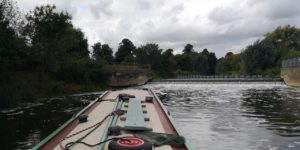 “Grace” is a 39ft narrow boat with a water draft of 2ft and air draft under the bridge at the time was just under 6ft.