Accompanying him, to unveil the name, were Sheelagh Rix and Don Allison, who had both proposed the name following a media appeal for suggestions.

Also present to welcome Electra were the Mayor, Cllr Mohammed Khan, and members of the Bedford & Milton Keynes Waterway Trust (B&MKWT), who were responsible for commissioning the boat.

Pete Winkelman said: “I was delighted to be asked to perform this naming ceremony on behalf of the Waterway Trust. Milton Keynes has a well-earned reputation for innovation as well as enjoying a wealth of history and Electra has managed to combine the two perfectly, with a traditional hull and pioneering electric propulsion.”

Jane Wolfson, Chair of the project team commented: “This naming ceremony is rather like introducing a new baby to friends and family. It has been an exciting process and now that she has been ‘delivered’ I can’t wait to see Electra gliding quietly along the Grand Union Canal on her first official trip.”

Sheelagh Rix explained why she had suggested the name: “I was listening to BBC Radio Three Counties’ Breakfast Show and heard that they were wanting suggestions for a name and Electra sprang to mind. She is powered by electricity and, as boats often have a female name, adding an A gave it a feminine sound, so I called the presenter and was put on air. It was an honour to be here to unveil it with Don”.

Electra was craned into the Grand Union Canal on 5th May. Her volunteer crew are currently undergoing practical training, so they can get used to handling her. Fare-paying cruises will begin at the end of July. For further details, please visit Electra information

Attached: selection of photographs of the event. 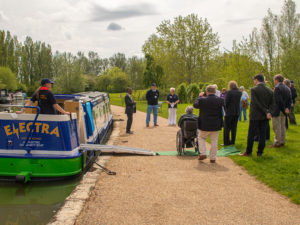 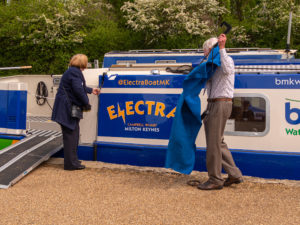 All images within this Press Release courtesy Gill Prince Photography

The boat can carry up to 12 guests and is accessible, with lavatory provision and access lift for wheelchair users, and is fully Covid-19 compliant.

Subject to Covid-19 restrictions, trips are planned to run from July to December in 2021. These will offer ‘something for everyone’ – from short ‘eye-spy’ family cruises to Friday night ‘bubbles and bites’, relaxing days out in nature, mindfulness trips and walkers’ one-way hops. Eventually, Electra could carry up to 4,000 passengers a year.

This will be the first all-electric trip boat to be built by Warwickshire-based boatbuilders Colecraft Engineering, run by Gary Cole along with a team of 20 supporting steelwork, carpentry, engineering, and sales staff. They have built more than 30 trip boats built since 2010, including two for Longleat Safari Park and twelve for the Olympic Games in 2012. The narrowboat will use an all-electric propulsion unit from Fischer Panda. The electric propulsion batteries with be capable of being charged from both mains power and on-board solar panels.

The Bedford & Milton Keynes Waterway Trust is funding the construction of the boat, with contributions from Crest Nicholson, via Milton Keynes Council s106 funding for the Campbell Wharf development, the Milton Keynes Community Foundation, and donations from Trust members.

The Bedford & Milton Keynes Waterway Trust was established in 1995 to promote a new 16-mile Waterway Park, incorporating a new broad canal connecting the Grand Union Canal in Milton Keynes to the River Great Ouse in Bedford.

Running trip boats is a key activity for the Trust, raising funds and awareness. Its cruises let thousands of local people enjoy being on their local waterway in Bedford, and soon in Milton Keynes, demonstrating the value that Waterway Parks can bring.

Having designed a route, now protected by local authority policies in three Local Plans, the Trust is supported by a Consortium of local and national partner organizations who are jointly lobbying for its inclusion as part of the Oxford-Cambridge Arc infrastructure. The Trust and its partners work together to ensure opportunities to integrate the Waterway into development and deliver local benefits are maximized. It is a company limited by guarantee and a registered charity.